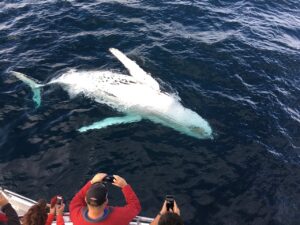 In recent times, Iceland has become one of the best whale watching tourist destinations in the world. Whales are large aquatic mammals and watching them splash water through their blowhole is both entertaining and awe-inspiring. In Iceland, you will get to see many different species of whales splashing water around.

Companies in Iceland offer affordable tours to see whales luxuriating in their natural habitat. But people often ask these important questions: When is the best time to visit for whale watching? Where the best place to watch whales in Iceland? And what types of whales can I see in Iceland? So, we are going to do justice to these questions in this article:

April to October is the best time to visit Iceland for whale watching, but the peak season for whale watching is June, July, and August. In Husavik, tours are fully operational from the end of March to the end of November, while whale watching tours happen throughout the year in Reykjavik. Whales can be spotted at any time of the day, while in the summer, whales were spotted more often. It’s very unlikely not to see a whale splashing around in Iceland at any time of the year especially in places like Husavik and Reykjavík.

Where to See Whales in Iceland?

Companies offer whale-watching tours to places like Husavik Akureyri and Dalvik in the North, Vestmannaeyjar islands of the South Coast, Olafsvik and Snaefellsnes peninsula. People mostly go to Husavik or Reykjavik for whale watching.

Located in northeastern Iceland, Husavik is one of the best whale watching tourist destinations in Europe. Husavik is reputed to be the best place to spot whales in the whole of Iceland. It’s easy to see the humpback whale in this area.

Make sure you visit the whale during your stay in this town. The companies organize whale watching trips in Húsavík using boats. The ticket offices or booths are located on the Main Street of Húsavík. North Sailing, which is the oldest whale watching company in Húsavík dates as far back as 1995. Their watching trips allow adventurers to make a stop at a puffin island where hundreds of birds nest during summer.

Perched on the northeastern coast of Iceland is Akureyri, the biggest town sitting on the outskirts of Reykjavík. It’s adjacent to Húsavík. There are a wide variety of whale watching tours in this town with other fascinating sites and activities that are perfect for a family with adventurous kids.

Read also: Do I Need a Passport to go to Puerto Rico?

Below is a list of the most affordable whale watching tours in Iceland:

Whale Watching on the Snaefellsnes Peninsula by Láki Tours

Read also: What is the Best Time to Visit Kauai for Snorkeling?