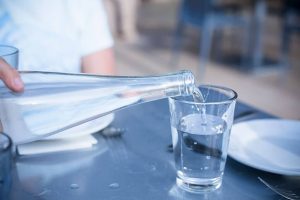 Ever walked into a restaurant needing some water, and you were charged? That might have been normal, or you may have thought, “wait, can they do that?”. It all depends on where you live.

Can restaurants charge for water? Is it legal? Which laws concerning this apply to you? We’ll be answering these questions and more in this article.

Can restaurants charge for water?

The answer to this is mainly dependent on where you live. In most cases, restaurants are allowed to charge you for water. They just choose not to, as it is very cheap, and some places just factor it in their running costs instead of charging for it. There are no laws in the US that state that restaurants are legally required to provide water for free to their guests. So, in most cases, while they are not required to, they do anyway. This is usually done as a complimentary service when you order some food.

In the UK, tap water is free in most restaurants. Restaurants cannot exactly charge for water, but they can charge for the cup or bottle instead. So, you could ask for a jug instead of a bottle, and you would likely not be charged for it. In other parts of Europe, it is primarily dependent on the restaurant, as there are no rules explicitly preventing them from charging for water.

Also, you may be asked if you would prefer tap, still, or sparkling water. In which case, the tap water would likely be free of charge, and you could go for that option.

Some restaurants serve water as a complimentary drink in countries outside Europe and the US when you buy some food, while others charge for it. Also, not every country has access to cheap drinking water, making it difficult for restaurants to offer water for free.

Some restaurants refuse to serve tap water to their guests even on request, as the supply might not be safe for drinking. And for countries that have experienced water scarcity, restaurants are likely to charge for water.

Can restaurants charge for water in California?

Restaurants can charge for whatever they would like to, including water. For example, let’s consider states like California. In places like these, there have been droughts in the past; some restaurants charge for water in those situations. Most restaurants that avoid charging for water do so to prevent backlash from customers since water is very cheap. However, in cases of water shortages, this principle might not hold.

Since 2015, the water conservation rules have prevented states like California from serving water unless the customer asks. So, don’t be surprised if you are charged for it.

Can restaurants charge for soda water?

Restaurants can charge for soda water, but most don’t. This could be for different reasons. First, it is almost impossible to track how much carbonation is present in every cup. And if the restaurant does so, it would not be a fair trade. It would be a heist to charge a customer for soda water.

In other cases, restaurants don’t have many customers come in to order soda water, so they might not even have a policy on it. Or they don’t have enough requests to consider charging for it. So even though they are not legally obliged to serve it for free, they do so anyway. Alternatively, restaurants can choose to charge for soda water but then set the price lower than that of regular soda. This is a widespread occurrence in many restaurants.

Can restaurants charge for tap water?

Restaurants can charge for tap water in some places, but they are not allowed to in other areas. This is because the cost of tap water in such locations is so low that charging for it would be a steal. To make up for this, some restaurants charge for the cup, or they offer just bottled water and charge for it.

Can McDonald’s charge for water?

Again, it is not a matter of whether they can, but if they do. McDonald’s does not have a fixed policy on charging for water, so this rests on the location. Some charge a dollar, others charge about 25 cents, and some do not charge at all.

Another deciding factor is the employees working. Some could charge more, some less. Some McDonald’s offer a fixed price for any size of their drinks. So that could also extend to their water. So, yes, they are allowed to charge for it, even though they might choose not to.

Read also: Can You Drink Tap Water in Valencia?

Do bars have to serve free water?

However, no law prevents them from charging for the bottle, cup, glass, etc., that they use in serving. They are also allowed to charge for their service. You are sometimes asked to pay for water in some restaurants.

Also, they are only required to serve free drinking water during the hours when they serve alcohol. If they don’t serve alcohol for a particular time, they might not need to help you with water for free.

Is water free at restaurants in Europe?

Water is free at some restaurants in Europe, but it is not mandatory. There are no laws by the European Union that require restaurants or other establishments to provide water for free. The decision to do this is entirely up to the establishment in question.