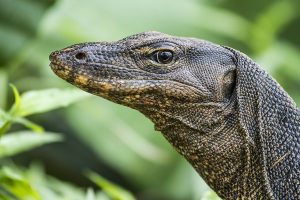 Whatever your reason for this inquiry might be, we’d be discussing where monitor lizards live, the different types of monitor lizards, and other relevant information that you might want to know. Curious? Keep reading.

Where Do Monitor Lizards Live?

Monitor lizards typically live in Africa, Southeastern Asia, Southern Asia, Australia, Indonesia, the Philippines, and on islands in Oceania. They can be found in jungles, rainforests, deserts, and aquatic areas. They can easily adapt to a wide range of environments. Each type of monitor lizard has its habitat and places that it originated from and can be readily found, hence, the habitat or origin of a monitor lizard depends on the type or species of the lizard.

This type of monitor lizard is typically found in Southeast Asia and the islands of Indonesia. They require a very warm and humid environment. They typically eat rats, insects, and mice. They can grow up to 5 feet and over 100 pounds. They can survive in water, on trees, and the ground.

This type of monitor lizard is one most commonly used as a pet because of how friendly they are and how easily they can be tamed compared to many other species. They are typically found in savannas of Africa and are made for digging. Their diet consists of insects and mollusks. They can also grow up to 5 feet and 13 pounds. They spend most of their time in burrows or on the ground.

This species is known to be the best to keep as a pet along with the Savanna monitor lizards. They have more advantages, better temperaments, and care requirements compared to other species. They originated in Australia and require moderate humidity. They typically eat insects and need space or opportunities to dig, climb and hide. They are one of the smallest monitor lizards growing up to only 3 feet.

The water monitor is one of the biggest monitor lizards you can find. They typically grow up to 8 feet. Despite their size, they are also easily tamed and are interactive, intelligent, and intuitive creatures. They are carnivores and their diet consists of insects, meat, and rodents. They require a pool and can climb.

The Timor monitor is known to be extremely shy and not very common compared to other pets. They can be found in Australia, Indonesia, and New Guinea. They hide a lot because of how shy they are, it is important to provide them with branches, vines, or any climbing apparatus. They enjoy climbing and the occasional soak. Their diet consists of insects and mice once in a while. They can grow up to 20 inches.

This species is another large one. It can grow up to 6 feet and can be a rewarding and easily tamed pet. Originating from Africa, it spends its time in burrows or on the ground. Hence, it will require significant digging space. They are surprisingly easy to care for.

Monitor lizards secrete venom that is harmful to their prey but not to humans. If you are ever bitten by a monitor lizard, you should be more concerned about getting a bacterial infection from the bite than the venom being poisonous – because it isn’t. The general advice when it comes to safety around monitor lizards is to leave them alone. Do not touch, provoke or corner them as they will attack you in defense. They are typically shy animals and can be observed from afar.

That said, some species of monitor lizards can be quite dangerous. The komodo dragons are known to eat people, so you might want to keep a safe distance. The venom secreted by monitor lizards is more harmful to infants than adults as they can stop blood clots and cause shock. They also have claws and like to climb so they might accidentally scratch you while trying to climb you.

Read also: Fun Things to Do In Nashville Tennessee for Couples

How to Get Rid of Monitor Lizards?

Some natural repellants can keep lizards away mostly with their smell. If you are not a very big lizard fan, then instead of asking where monitor lizards live, you might be more curious about how to get rid of them. Some of the repellents you can try include:

You can also try to capture the lizard and release it somewhere far away from your home. You can do this by capturing it with a noose and sack or you can put it in a 50-kilo rice bag.

When trying to get rid of monitor lizards, one should first why they are there in the first place. Here are some tips to prevent monitor lizards from coming to your home:

Read also: Places to See in Barcelona in 2 days

Where do monitor lizards live? Anywhere basically. As stated earlier, they can survive in many different habitats and their species originate from many different parts of the world. Whether you love them or hate them, you would greatly benefit from reading this article.